The previously announced Pokémon movie, Pokémon the Movie: Secrets of the Jungle, will be released worldwide on Netflix on October 8, 2021. This movie features the Mythical Pokémon Zarude and a human boy named Koko that was raised by one.

END_OF_DOCUMENT_TOKEN_TO_BE_REPLACED 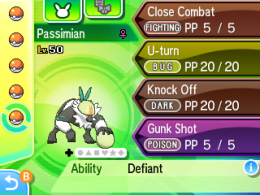 Get a Passimian with Defiant and Oranguru with Symbiosis, their Hidden Abilities, by logging into Pokémon Bank and receiving these gifts.